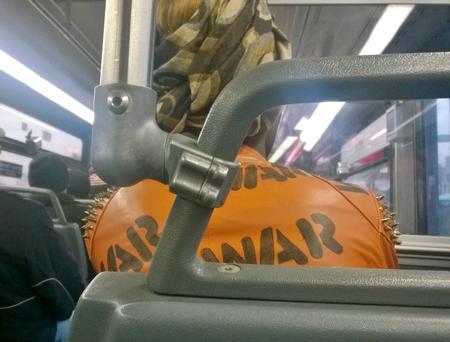 ​“NEWARK IS THE THIRD OLDEST CITY IN THE UNITED STATES, IT MIGHT BE THE MOST ABUSED.  THE BRICK CITY, NEWARK.”

Reimagining the Black Spirit in the Media​

Newark is celebrating its 350th year anniversary but there is a problem.

The Newark that the media and others know is really only four days old. It was born and then died during the 1967 riots.  Where did this perception come from and why does it still exist?  Why does it conflict so deeply with the unrelenting Black spirit that Black cultural workers know exists?

The word on the streets is that in 1967 Black Newark rebelled, ravaged the city and was defeated.  Damning references started immediately about Newark’s uprising even the Durham Morning Herald warned in 1967, "Another Newark Threatened Here.”

This narrative was repeated everywhere: in the press, on television, in jokes and during private conversations. I stopped reading the comment sections on articles about Newark’s “renaissance” the day I saw commenters calling residents “the inhabitants,” “the Black people,” and “monkeys.”

A writer in the comments section advocated burning the city and the “monkeys” down. It wasn’t the first time that solution had been proposed, metaphorically or literally. Apparently the land has value and the Black bodies do not.

The fairytale in popular American media is that Newark, a city of Blacks (not of every other race that lives there as well), let an amazing industrial city go to ruin via riots. There is no possibility for it in any way to help itself without outside intervention, and ultimately, the “grace” and “return” of whites.

In a 2014 article in The Guardian titled, “Wherever American cities are going, the battle will be won or lost in Newark, not New York,” the author Xan Brooks starts with a passage stating,

“Halloween comes early to Newark…although in a sense it never left. On the residential streets of the depressed south ward, the family homes have been decorated in readiness … and illuminated pumpkins. At night, these houses glow like beacons amid the derelict buildings with their gaping windows and their tumbledown roofs... You don’t have to look far to spot the real haunted houses.”

The piece attempted diplomacy and non-bias, but I was troubled by the relentless description of the “horror” of Newark, as a bombed-out, godforsaken city, not just in the physical environment, but in spirit too.  What about the steadfast businesses, organizations and organizers? What about scholars and artists?  What about graduation days, fashion shows and block parties? Is the full breadth of human life nonexistent for Newark’s Blacks?  Where is the Black Spirit?

“…there is absolutely no acceptance of blk personal reality.  If you are 14, female & black in the u.s.a./you have one solitary voice/though you number 3 million/no nuance exists for you/you have been sequestered in the monolith/ the common denominator as persona.”

Accordingly, the usage of the word “black” to describe Newark’s Black residents is a code word for “hopelessness.” In his article, Brooks uses it to modify the wealth of the population, almost as if “black” is not a culture but the economic value of the soul and future profitability. “Ultimately,” he concedes, “the fate of the city comes down to dollars and cents. New Jersey’s largest city is predominantly black and disproportionately poor.”

If being predominantly Black alludes to lack of spirit and hopelessness, then what is there to do of the existence of Black-led organizations, spiritual spaces and leaders that work to build the spiritual wealth of the city?

Spirit House, created in 1966 by Newark’s native son and writer Amiri Baraka, along with artist Amina Baraka, was a Black radical space to cultivate the performing arts as well as a center for community and political organizing.  It wasn’t a solitary effort to empowerment.  Amina Baraka’s work with women expanded on the history of Black women’s organizing in Newark that started as early as the 1920’s with the formation of the Theresa Lane Council which served as the foundation to Queen of Angels church.

Other Newark groups included The Committee for a Unified Newark, Black Community Defense, and United Brothers. Aljira, a Center for Contemporary Arts, celebrated its 30th anniversary in 2015. People’s Organization for Progress, Stop Shootin’ and The Lincoln Coast Park Cultural District led and founded by Blacks to empower the spirit of Newark, so why are these powerhouses rarely spotlighted?

What is the benefit of the media, economic and social entrepreneurs portraying Newark as a city of Black blight? The benefit of perennially depicting a Newark that is barren, an urban “Wild West” makes any investment at all seen as a “grace.”

​
How does “grace” benefit investors and yield a profit economically and socially?

A recent commercial project built downtown by Prudential Financial was awarded a $211 million tax credit award for a building in Newark and in turn promised 2,000 more jobs, 400 of which are permanent.  Senator Cory Booker ascended to national attention for his four-month stay in a trailer in front of Newark’s Brick Towers, one of the city's “worst areas” where families have lived for decades.

Newark is not unique in using tax credits, as many cities award them as incentives to businesses. But what happens when cities in economic distress can’t reap guaranteed income needed from taxation but instead rely on speculation income? What happens when the jobs created can’t provide a living wage to either individuals or families?

Disguised behind the traditional stereotype of Blacks needing to be rescued or replaced by whites, what is revealed on closer inspection is how being perceived as “empty,” deliberately undermines the existing contributions and potential of Blacks. It purposefully blasphemes the city’s cultural, economic, and spiritual wealth for economic and social power and profit.  But what is the argument for Newark’s core profanity?  Crime is cited as the primary reason why Newark is poor and spiritless.

In “Is Newark the Next Brooklyn?” Jason Nark describes Newark as a city “that struggles still with almost impenetrable unemployment and homelessness and crime” and an “urban abyss,” though the “city is building,” he concedes at one juncture.

In another article in The Politico, Mark Bonamo quotes Newark’s Mayor Ras Baraka, saying, “We don’t have to gentrify it in a way where we kick people out. We have enough space in Newark to invite people in, and yet keep people here at the same time… To me, this is my dream job.” The author retorted, “But dreams can get beaten bloody in a place like Newark.”

Dreams are not beaten bloody in other places? Do Newarkers dream?

I recently took a six-year-old Newark student to see the Kehinde Wiley exhibit. Wiley is a celebrated Black artist from Los Angeles who paints young Black people living in places like Harlem, Compton, Chicago, Port Au-Prince, and Newark, and inserts them into a traditional master art narrative, essentially asking us to see these youth as heroes of an epic, human, spiritual narrative.

As we looked at the paintings, one of a Black woman, her back turned to the viewer looking into a beautiful but discordant pattern, I asked the student who the woman was waiting for.

Unexpectedly, she whispered, knowingly, understandingly “She is waiting for God.”

Her response echoed the depiction of Zora Neale Hurton’s radical spiritual tale of Black community in “They seemed to be staring at the dark, but their eyes were watching God."