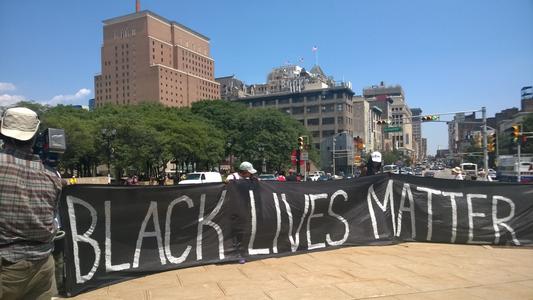 "If we look at the Stono Rebellion, the staked heads were a warning to Blacks but also to whites that Black rebellion, not the human rights abuse of slavery as an institution, was the real danger to society."

In 1739, when whites mounted the stinking, severed heads of Blacks on stakes along major roadways in South Carolina in retaliation to the violent Stono Rebellion, the nightmarish scene made it plain to everyone that Black revolt would be viciously and spectacularly suppressed.

The sensational discipline by American leaders of Blacks then in the United States were not isolated incidents, nor was it reserved for violent rebellion.

An unrelenting history of terrorism against peaceful Black protest was predominant: lynched bodies, tar and feathering, amputation, hoses and billy clubs against children to the recent shooting of protesters in Minneapolis, and the shoving of a peaceful young Black woman protestor at a Trump rally by more than a dozen men.

The increased visibility of Black protesters, including Black Lives Matters and long time community justice protesters this political season has illuminated historical and contemporary violence against them by moderates and conservatives.

Bill Clinton’s recent (see Sister Souljah moment) actions against Black protesters, though not physical in nature, continued this legacy of discipline as spectacle by his eviscerating public accusation that the protesters were criminally affiliated and hence corrupt.

Clinton then attempted to play the audience for fools by instilling a false separation in the history of Black protest, demarcating 1960s Civil Rights workers as the righteous protestors compared to them and stating, “You can trust them, or Congressman John Lewis, the last remaining hero of the Civil Rights Movement.”

Interestingly, John Lewis was an organizer and leader in 1965 in what Blacks called “Bloody Sunday” suffering a skull fracture by police during a peaceful protest that the police labeled an “unlawful assembly.”   The violence against Black protesters then, as now, broadcasts a larger message to those thinking of participating in peaceful protests for civil and human rights – that you may be hurt or killed. Like Black Lives Matter protesters today, peaceful protesters then were depicted as instigators and criminals, children and women included.

And that is the key strategy: Treat Black protesters violently, make a very public example. The spectacle of violence influences the public perception of Blacks tied to this and the resulting legislation deliberately impacts Black civil and human rights.

"That strategy of “getting tough” while at the same time eviscerating the federal social safety net was NOT supported by many of the black politicians he seeks to use as cover. Rep. John Lewis (who Clinton referred to yesterday as the “last remaining hero of the civil rights movement”) fiercely opposed welfare reform, accurately predicting that it would thrust more than a million more kids into severe poverty."

John Lewis said back then: “How can any person of faith, of conscience, vote for a bill that puts a million more kids into poverty? What does it profit a great nation to conquer the world, only to lose its soul?”

And this is at the heart of the three-card Monte, an obfuscation of the sincere critique put forth by protestors by overshadowing with an accusation of criminality, to set the stage for larger, sweeping, punitive communal legislative and social policies that affects many Blacks and (even whites especially poor ones).

This supposed discipline clears the path for legislation. If we look at the Stono Rebellion, the staked heads were a warning to Blacks but also to whites that Black rebellion, not the human rights abuse of slavery as an institution, was the real danger to society.

The Negro Act of 1740 served as an opportunity to expand the human rights violations against slaves, criminalizing reading, congregating and music as a communication tool and even growing one’s own food.

Consequently, we see that Black protestors publicly protesting the spectacular media scapegoating of Black youth by the Clinton team as a part of a strategic agenda.  The goal? To break the stigmatization and consequent crippling legislation to Black communities by labeling them havens for criminals.

It was no mistake when Alice Walker put to paper that the soul of Black feminism (which she labeled womanism) is that liberation is both an individual and a collective undertaking for Black changemakers.  Explaining:  "Mama, I’m walking to Canada and I’m taking you and a bunch of other slaves with me.”

Reply: “It wouldn’t be the first time.”